Deacon Chuck Melville was assigned to St. Barbara Church after being ordained a deacon in 2010. In his professional life, Deacon Chuck spent 30 years in law enforcement. After having retired in 2005 as a chief of police, he advanced to the position of Director of Training for the Police Academy in Richmond, KY where he traveled each day from his home in Union, KY. Deacon Chuck retired from the police academy in April of 2014.

Throughout the week, Deacon Chuck is involved in many aspects of Parish life, including; assisting at daily Mass, conducting Communion Services, visiting sick and home bound parishioners, and leading the RCIA program. He also assists at weekend Masses, performs Baptisms, weddings, and funerals and many other duties as needed.

Chuck and his wife Tina have raised two daughters and now have a son-in-law and four grandchildren. 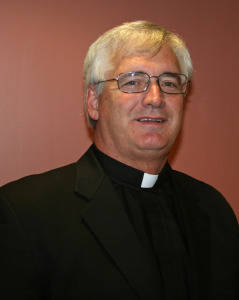